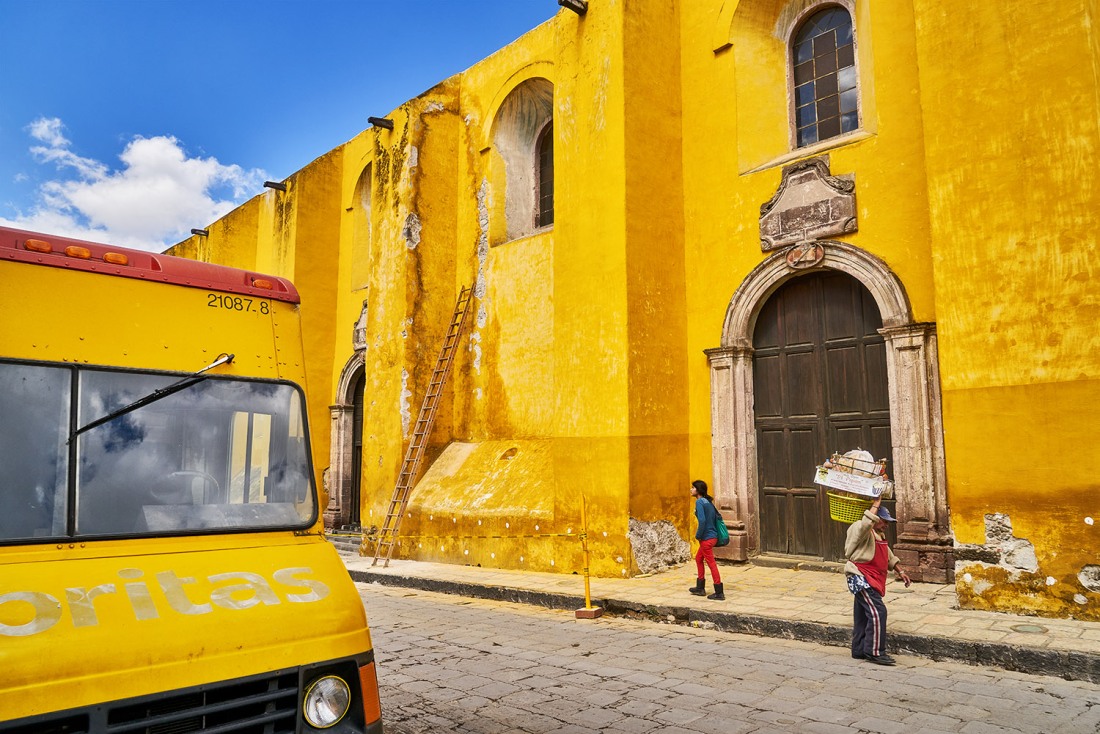 Are you curious yet? Read on…

A boy waits for a bus on a San Miguel street

Every year Travel and Leisure magazine asks its readers to rate the best cities in the world. This year (2017), the city that came up tops was San Miguel de Allende, Mexico.
Having recently visited San Miguel, I can easily see why and it comes as no surprise to me.

Oh and by the way, this city was declared a UNESCO world heritage site in 2008.

So I thought it was apropos to write a short post on San Miguel de Allende (SMA).

To start off, lets get started with some basics and a slice of history.

San Miguel de Allende, or SMA in short, is located about 140 miles north of Mexico City. It has an elevation of 6200 ft. Due to its geography, it is blessed with excellent weather all year round.

It was founded in the 1500s and it was originally named after Father Juan San Miguel. In 1862, the city changed its name to San Miguel de Allende in honor of Mexican General Ignacio Allende.

The city had grown rich from the nearby silver mines during the Spanish rule. Once the silver ran out and after the war of independence from Spain and the Mexican revolution, the city lay in decay. By the early 20th century, the city was on the verge of becoming a ghost town.

The year was 1937. Enter young Chicago native Stirling Dickinson – a Princeton graduate who happened to make a stop in this city and fell in love with it. In just a few months he co founded the Escuela Universitaria de Bellas Artes in a former convent.

He served the US in WWII and returned to San Miguel after the war. He then went on to recruit hundreds of veterans to study arts under the GI Bill. Over the years following the war, the city became a haven for painters, sculptors and other artists.

Today, SMA is known for its well preserved baroque colonial architecture, its cobblestone streets, vibrant arts scene and its growing importance in the Mexican culinary landscape. Add to all of this, excellent year long weather, relatively inexpensive cost of living and low crime rate. It is no wonder that a lot of north Americans have skipped the Mexican beach scene and taken into this cultural gem leading to a huge expat community. While the numbers vary, almost one in every 10 residents is an expat. I was initially wary of this fact and wondered if visiting the city would be an authentic experience. Thankfully, it has managed to preserve its heritage and traditional charm and in a way has combined the best of both worlds to become a truly outstanding destination.

A mariachi band practicing before a performance

Color defines the city. From what I understand, in the city center, only 8 historic exterior paint colors are allowed (Venetian red, ocher, umber, mustard, cayenne, emerald, cerulean, and vermilion).

Here are a couple of things you may not know about the Parroquia.

The city is best explored by walking. Make sure you bring a good pair of walking shoes. The hilly terrain, the high altitude and the cobblestoned streets don’t make it easy on the feet and will give you a workout. Keep in mind, there are no traffic signals or signs. Everyone drives by courtesy and the honor system. 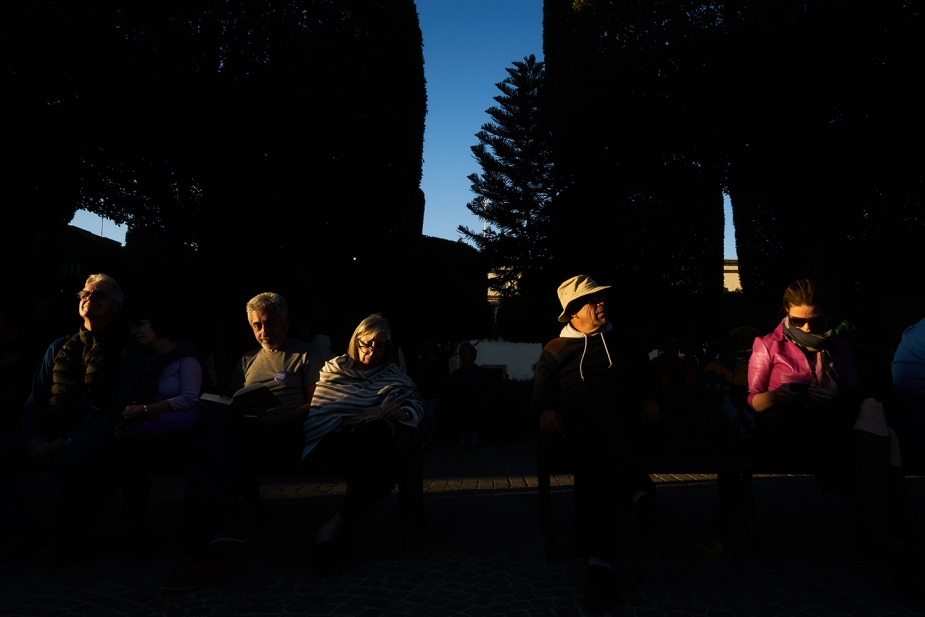 The gorgeous colors and beautiful light reflected off it makes it a photographers heaven. Walk up to El Mirador to get a gorgeous view across the city. Walk down on Recreo to get a classic shot of cobblestoned streets with the Templo de San Francisco as the backdrop. Walk down Aldama, to get the classic shot of the Parroquia at dusk.

The view from Recreo 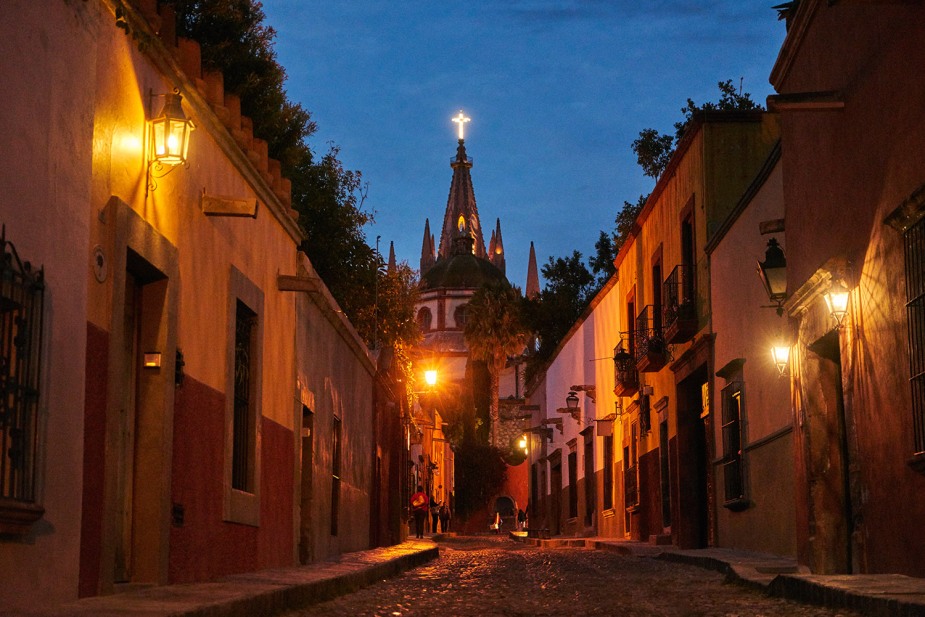 The Parroquia at dusk

Lining the beautiful cobblestoned streets are colorful walls and beautiful doors, many of them framed by hand crafted ironworks. If doors are your things, the historic center hosts 2000 of these beautiful doors, most of them hiding beautifully preserved courtyards.

The main action in the city happens around the main square in front of the Parroquia. On any given weekend or even a weekday, you will run into a wedding or a festival or a religious ceremony…or just a party. We ran into multiple weddings (apparent its a hot destination wedding spot for foreigners in the winter months) and a couple of “sweet sixteen” parties. This is where you will encounter the Mojigangas – an icon of San Miguel. It seems like a ritual in San Miguel, that every wedding or celebration (religious or not) winds up being a parade or procession that leads through the cobblestoned streets and ends up in the town square. At this point it becomes a very open and public party. Each of the parades or processions are accompanied by the Mojigangas. And it is hard not to be captivated by them. 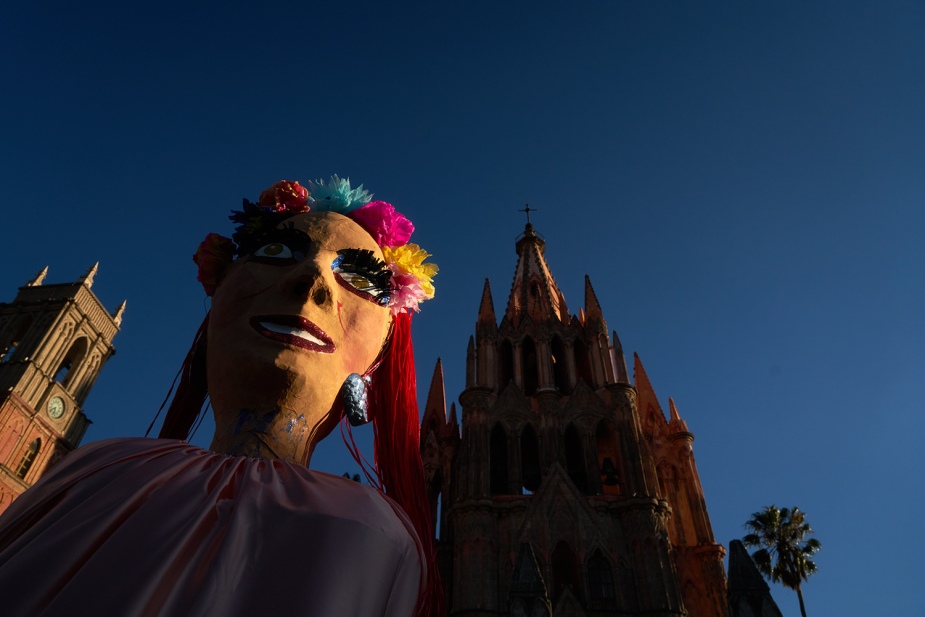 Mojiganga with the Parroquia in the back

So let me introduce you to the Mojigangas (pronounced mo-he-gan-gas).
They are giant whimsical paper mache puppets. The tradition can be traced back to the Spanish tradition of Los Gigantes. While the Spanish version represented aristocracy and were more like dolls, the Mexican version morphed into a more whimsical, burlesque form. 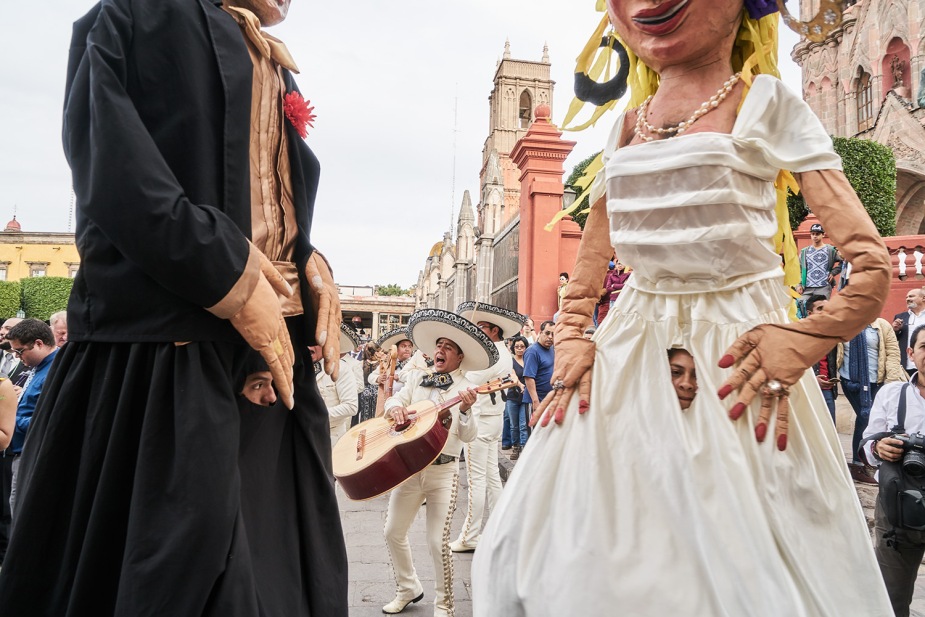 These Mojigangas bring the parades to life. Accompanied by mariachi bands and a healthy dose of tequila, they transform the main town square into this street party you won’t find anywhere else. If you are a street photographer, the opportunities are endless. At this point I must mention that every one of these processions or callejoneada seem to have another thing in common. We noticed that almost everyone on the procession wore a little shot sized cup on their neck, and there was always one person carrying a bottle (or more) of tequila serving their needs. 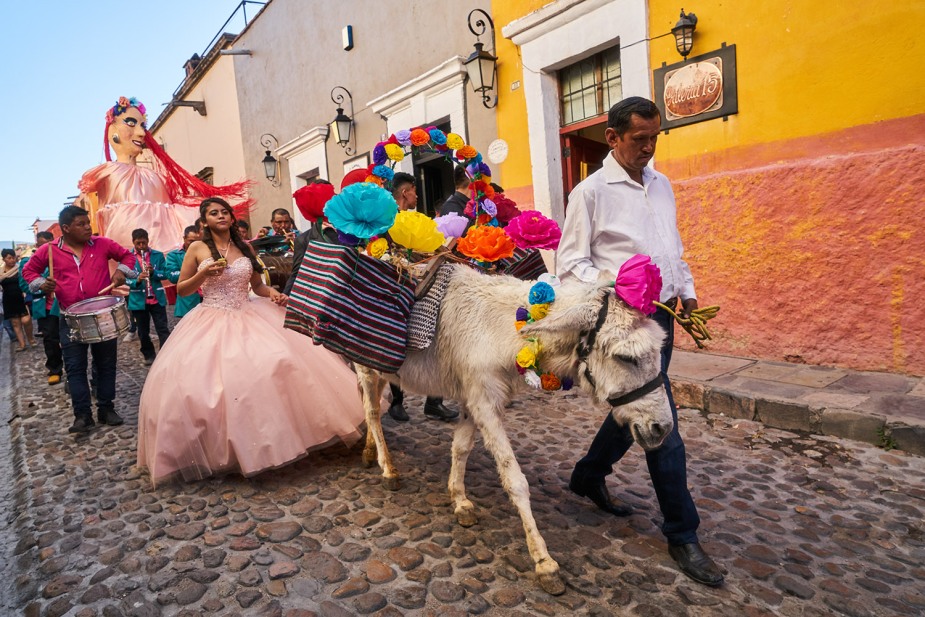 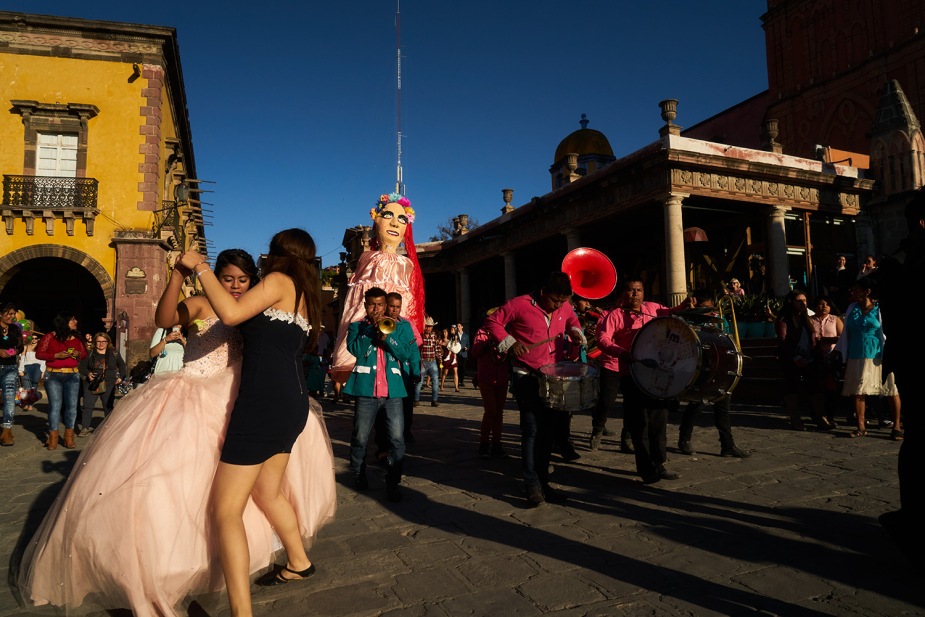 Celebrations for a sweet sixteen in the town square

Imagine the scene – dancing giant puppets with a mariachi band on cobblestoned streets in front of a pink neo gothic church and a crowd infused with tequila. Life is good. 🙂

The tequila bearer for the group

There are festivals all year around. Some of the bigger ones being holy week, Fiestas de San Miguel de Allende, Festival la Calaca (Skull Festival), and Festival de Música de Cámara or Chamber Music Festival. The San Miguel Food festival is growing to be one of the most important culinary events in the country. There is no dearth of cultural and artistic events. There seem to events happening every week from professional dance, musicians, opera, learning lectures, cinema and documentary series. The Biblioteca Publica de San Miguel de Allende that rivals any public library anywhere in the world for its academic and literary services. For art, visit Fabrica La Aurora, one of San Miguel’s unique destinations – a beautiful art and design center housed in a former textile factory from the turn of the century. Indulge in some folk art shopping at Mercado de Artesanias. 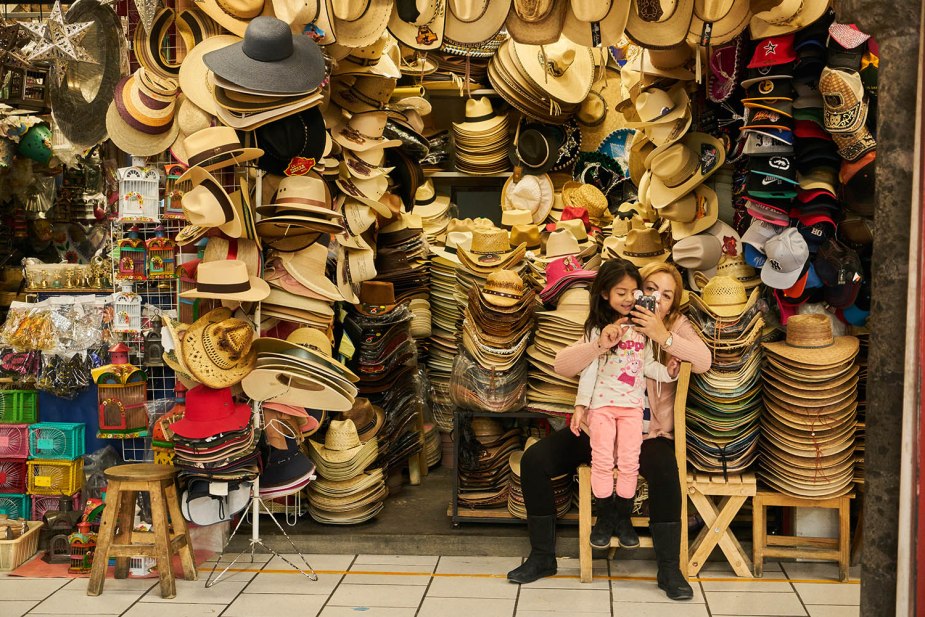 A hat seller at the Mercado de Artesanias

For food, make a stop at Moxi Restaurant at Hotel Matilda. Its chef, Enrique Olvera, is perhaps the most prominent chef in Mexico today. The Churros at Cafe San Augustin are to die for. So are the tortas at any of the fondas (stalls) at the Mercado Ignacio Ramirez. Fall in love with Mezcal at the many of the bars that dot the city. And yes I must admit that there is a Starbucks in town unfortunately.

If you love craft beer, make a stop at The Beer Company on Ancha de San Antonio.

If you are visiting, plan to stay around the city center. We flew into Leon and arranged a taxi to the city.

In all, San Miguel de Allende makes a compelling case justifying being voted the number one city in the world. For folks living in the US, its perfect for an extended weekend of 3-4 days. Or as we found was the case with many expats, its perfect for a lifetime.

All photos by Shamik Ganguly

View all posts by Shamik Photography